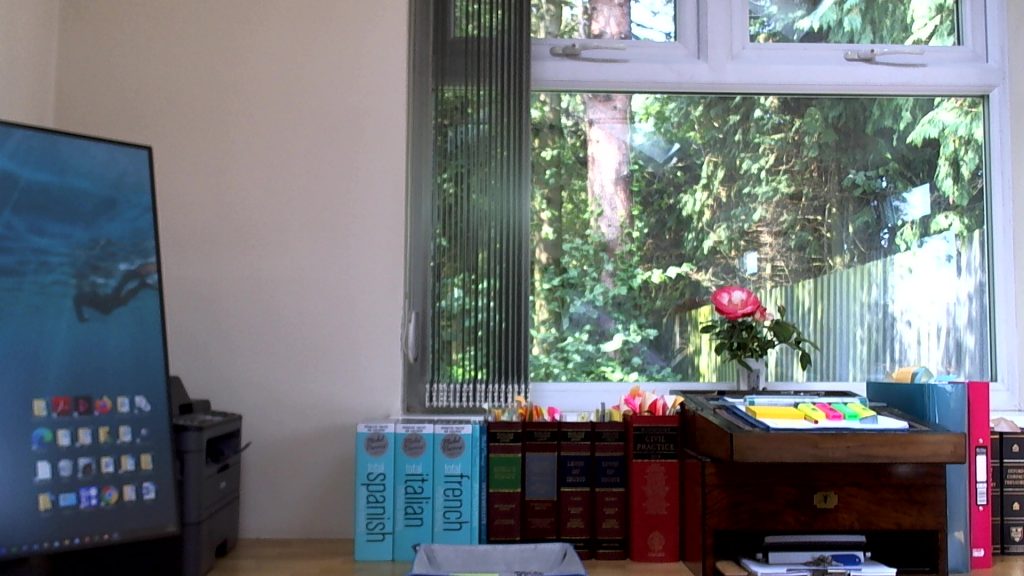 MSoM, Certified Mediator and Panel Member of the Society of Mediators in London (Membership Number: 61667028). (www.societyofmediators.com)

I am developing the mediation of Art and Cultural Heritage disputes (including Art Restitution) as a niche practice area.

I am a member of the Institute of Art & Law in London, where I am studying for a Diploma in Art Law.  The provisional title of my three Diploma essays, which I am planning to write during the second half of 2022 is:

The third essay will include discussion of the nexus between: (i) cultural heritage law; (ii)  human rights; (iii) the moral case for restitution; (iv) norms of behaviour under international law; (v) multi-lateral Cultural Heritage Diplomacy; and (vi) Humanitarian Mediation – see the ‘Humanitarian Mediation’ page at www.diplomaticlawguide.com.

In Art and Cultural Heritage disputes mediation is the norm.

Furthermore, civil litigants in England and Wales can lawfully be compelled to use mediation, according to a new report by the Civil Justice Council. See:

A move towards compulsory ADR? (newlawjournal.co.uk)

In an art dispute, the court will apply the preponderance of evidence standard.  The judicial function is not to find an absolute truth but merely a preponderant truth. Judges generally lack the connoisseurship to endorse an expert’s judgment by eye, i.e. judges must rule on questions of art authenticity by strongly relying upon expert evidence, without having the requisite skill and knowledge to evaluate and critically assess such evidence. Consequently, in a misattribution dispute, instead of rendering a judgment based upon the experts’ arguments substantiating a specific attribution,  a judge may decide that a specific expert is more eminent and established, and consequently that expert’s attribution will prevail.

In a breach of duty claim against an auction house, the diligence test applied by English courts is based upon a fiction – the reasonable auctioneer who uses adequate care in the execution of his duties and obligations. This has two drawbacks. The first is when no expert consensus existed at the time of a wrong attribution. The second, is the circularity and contingency of scholarship, exposing attributions to divergences amongst scholars and to continuous change.

To the extent that geography is a military and political constraint, cultural heritage is a third dimension that is part of the equation in resolving a geo-political dispute. Critically, it allows for the application of fiduciary principles in the negotiation of a sustainable peace. These principles have a provenance that stretches back to antiquity.

In cultural heritage disputes there is a philosophical and legal nexus between the existence of ethical standards and norms of behaviour in relation to antiquities and cultural heritage (which includes landscape). Because formulating international ‘ethical’ duties of care and standards (i.e. framing and institutionalisation), that are capable of practical implementation, monitoring, and enforcement involves multi-lateral diplomacy, mediation  is an incubation tool in cultural heritage diplomacy.

Norms are linked to the existence of fiduciary duties. This is an evolving question that is linked to the concept of global fiduciary governance in the form of treaty-making and multi-lateral co-operation.

My theory is that when art [‘A’] is of cultural significance, i.e. is recognised as being cultural property [‘CP’], it forms part of a recognised heritage. If then in either a narrow or a broad sense, it becomes part of civilization and a record of human evolution (i.e. part of the consciousness and collective memory of mankind), public duties do or should attach to possession. In particular, the possessor [‘P’] who owns A under private law that is also CP, is also a custodian of the object [‘CPO’]. In which case, fiduciary duties attach to possession, e.g. a duty to preserve and protect the cultural property [‘DP’] (including an underwater site). If P is a state, these duties extend to protecting the CP in the event of war. Therefore, DP is a quintessentially fiduciary duty.  The underlying premise is that every civilized society is a fiduciary of humanity, and so are their governments.

There is also a relationship between the human environment, development and culture. The commentary to the preamble to the Draft International Covenant on Environment  and Development (5th edition, IUCN Switzerland 2015) states:

‘All civilisations spring from and are shaped by the quality of their surrounding natural elements [and that] the histories of different peoples are inseparable from the natural conditions in which they have lived for millennia. … Art, literature and science cannot be understood, or even imagined, without acknowledging the influence of nature and its components. Thus, cultural diversity, like biological diversity, emerges from the various ecosystems.’

Since the Declaration of the UN Conference on the Human Environment, Stockholm, June 1972  (the ‘1972 Stockholm Declaration’) stated that ‘Man has a special responsibility to safeguard and wisely manage the heritage of wildlife and its habitat which are now gravely imperilled …’, and this ‘special responsibility’ includes a duty to restore and maintain the integrity of the environment, the existence of fiduciary duties in relation to cultural heritage is linked to wider: environmental; strategic; legal; and policy issues, i.e. international law applying to activities on the high seas and on the continental shelf.

The big question is ‘What ethical standards of behaviour do these duties give rise to?’   This is linked to:

(ii)      the protection and preservation of cultural property; and

The problem of illicit trafficking is further linked to:

Because cultural identity is considered to part of human dignity, it is linked to human rights, i.e. cultural heritage is of crucial importance to individuals and communities as part of their identity. Since cultural heritage requires memory, this applies to both tangible and intangible heritage, because material and physical heritage needs to be placed in both a historical and cultural context, in order to understand its value.

and the ‘Humanitarian Mediation’ page at www.diplomaticlawguide.com

If you are wondering what the connection is (and there are many), between contentious probate disputes and the Art world, consider the following claim made against Sotheby’s for a ‘sleeper’ (i.e. work of art that is unrecognized, whose true nature has not yet been revealed and is ’dormant’). Ernest Onians, a British businessman and art collector, bought a painting at a country house auction in the 1940s which he stored in a chicken shed. He thought it was the ‘The sack of Carthage’ by the Italian artist Pietro Testa (1611-1650). Following his death, the painting was presented to Sotheby’s, by which time it was covered by a thick layer of dust and dirt, but was otherwise in good condition. The auction house offered the painting for sale attributing it to Pietro Testa with an estimate price range of £10K-15K. At the auction the painting reached a hammer price of £155K. Leading art historian Denis Mahon advised the winning gallery that the auction house had potentially misattributed the painting as it might be a work by the French master Nicholas Poussin (1594 to 1665). After the sale the painting underwent restoration for two years after which Mahon and the director of the Louvre Museum, Pierre Rosenberg, confirmed that the painting was indeed by Poussin and once owned by the Cardinal Richelieu. In 1998, the gallery sold the painting under its accurate attribution title, ‘The destruction and the sack of the temple of Jerusalem’ to the philanthropist Jacob Rothschild and the Rothschild Foundation for £4.5 million. Dismayed by the significant undervaluation, Onians’ heirs brought suit against Sotheby’s, which the parties ultimately settled for an undisclosed amount. Please note that nearly all such cases settle in negotiation or through mediation. The difference between £4.5 million and £155K = £4,345,000.

‘Upon consignment, an in-house specialist or external expert appraises each lot in order to generate a description for the sale catalogue. In appraising an art object, the expert identifies attributes, namely its creator or the respective place of origin or discovery, the date or period of creation and provenance. The final result of that assessment is expressed in the art object’s attribution. When a sleeper is offered at auction, the expert has failed to correctly determine the valuable attribution of the art object. As a result the art object is sold for a considerably underestimated price. [In other words a sleeper is] an artwork or antique that has been undervalued and mislabelled due to an expert oversight and consequently has undersold at auction. The auction house’s misattribution is printed in the sale catalogue as well as displayed on its website, communicated to potential clients and to those attending the sale. Accordingly, the art object is introduced into the public art market under a wrong label.’  The sale of misattributed artworks and antiques at auction by Anne Laure Bandle (2016).

An example of the importance of properly dating consigned antiques is a jug given an estimated price range of £100-£200 by a regional auction house, which was sold to an anonymous buyer for £220K, and following cancellation of the sale, was consigned at Christie’s and sold for its new estimate of £3 million. The regional auction house had not spotted that the crystal ewer originated from the early high Middle Ages. Christie’s described it as ‘a carved rock crystal ewer made for the court of the Fatimid rulers of Cairo in the late 10th or early eleventh century.’ ‘Holy grail’ jug they valued at just £100 is sold for £3m | Daily Mail Online

ICOM Code of Ethics for Museums (revised in 2004).

McFarlane, Ben and Charles Mitchell (2015). Hayton and Mitchell: Text, Cases and Materials on the Law of Trusts and Equitable Remedies. Sweet & Maxwell Ltd.

Palmer, Norman (2015). Art, Adventure and Advocacy – Contract, Claims and Controversies in the World of Cultural Property. Institute of Art & Law.

Strong S I (Editor) and Tony Molloy (Consultant Editor) and others (2016). Arbitration Of Trust Disputes – Issues in National and International Law. (2016).

The Granada Convention 1985 (The Convention for the Protection of Architectural Heritage in Europe): https://rm.coe.int/168007a087

The Hague Convention 1954 (The Convention for the Protection of Cultural Property in the Event of Armed Conflict): http://portal.unesco.org/en/ev.php-URL_ID=13637&URL_DO=DO_TOPIC&URL_SECTION=201.html

The Valetta Convention 1992 (The Convention for the Protection of the Archaeological Heritage of Europe): https://www.coe.int/en/web/culture-and-heritage/valletta-convention